Evelyn Swanhild Halvorsen was born in Brooklyn, NY in 1936. “Made in America with 100% Norwegian parts” is what she would say. Her parents were Norwegian immigrants…her father a ship builder, her mother a cook. She had one older sister, May. Both girls were given an American name and a Norwegian name… mom was always called Swanny, her Norwegian name. The Halvorsen sisters grew up on Long Island. Mom was a very spirited, independent young girl. Full of fun and practical jokes, she created friendships that have lasted a lifetime.

Following in her older sister’s footstep, after high school graduation she enrolled in nurses training at a Brooklyn hospital where she soon fell in love with the cute new Mexican doctor, Jorge Monges. The doctors and nurses were not allowed to date each other so it wasn’t long before mom dropped out to marry him.

Together, Swanny and Jorge had 3 children (2 boys and a girl) that they raised on the central South Shore of Long Island. Jorge worked as an ER physician for 30 years while mom was busy raising us kids, caring for her father who lived with us (our grandmother died of cancer when mom was 20) and coordinating many social activities (along with her friends) for the church! She had the gift of hospitality and our home was always full of missionaries, church singers, guests and people who just needed a place to live for a while!  She had a heart for people in need and was always helping however she was able. It was a joyous life… very rich with close bonds of friendship and laughter.

After retirement Swanny and Jorge sold the big old Victorian house and moved into a golf condo community in the center of Long Island. New friendships were made on the golf course. Jorge was the real golfer of the two, but Swanny decided to give it a try and before long she became dad’s “trophy wife”… she was a natural. “One swing Swanny” brought home many trophies. They were very active in their new community. Life was good.

In 2009 Swanny held the hand of her sister, May, as she slipped into eternity after a 4 year battle with what we now know was Lewy body dementia. It was hard to watch her sister’s decline… especially knowing that she, herself, was already starting to show the same symptoms.

Mom’s journey with Lewy body dementia started with occasional confusion and a notable change in her gait (shuffling).  She was tripping often and didn’t trust her feet. 2009 came the diagnosis of Parkinson’s Disease. New symptoms kept popping up… confusion increased, she could no longer manage finances, cooking was a challenge and most disturbing, she was hallucinating regularly… first seeing bugs and then scary dark strangers always lurking around the house. Her world had changed drastically. Even though she had great, loving support from her husband, loyal friends and wonderful neighbors, the time came when dad could no longer manage her alone 24/7. In 2011 they moved to Michigan to live with me.

The first year was tough.  Mom didn’t recognize me as her daughter (although really appreciated the fact that I was there to help her) and was troubled by the fact that none of her friends ever came to see her anymore. There was so much confusion and her hallucinations and delusions became morbid and frightening causing much fear and agitation.

As her limbs continued to stiffen, falls began to happen more frequently. Hospitalization became necessary when the paranoia got out of control to the point she was afraid of us. While she was there they found the right meds to help manage her symptoms. It was such a relief. After her release, she had some follow-up, in-home care. It was through those caregivers that we first heard about the PACE program.

The PACE program was life changing for us. They stepped in and brought some order to the chaos. I now had a whole team of professionals to help me manage mom and all that came with the new diagnosis of Lewy body dementia. She starting going to the center a few times a week, giving my dad and me some much-needed time off and encircling my mom with friendly faces that knew her name in a social environment that felt familiar to her. She received physical therapy and medical care as well as fun social activities. She even got to take her own “school bus” there. As her disease progressed, PACE gently helped us transition her into assisted living… I couldn’t have made that decision alone and really appreciated the love and support they gave us during that time.

Mom remains in assisted living. Dad and I are still a part of her everyday life and she continues to go to the PACE center twice a week where she still responds to the smiling faces that know her name. Life is peaceful and she sits comfortably in her big, fancy reclining wheelchair. Mom and I have a mantra to live life one day at a time counting the blessings in each day… to me, each day is a blessing. 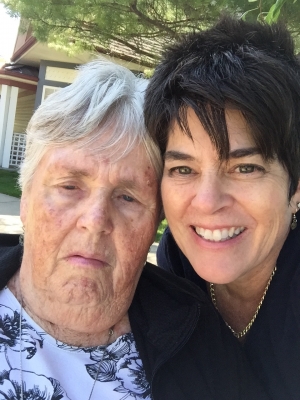