We first noticed something was not quite right when my Dad turned 75. He had continually worked part time in a delivery job but had been forced to give it up after eye surgery. He was a fit guy who looked a good 10 years younger and who loved cycling and going for long (10-12 mile) walks.

One evening he started to talk about how he wanted to go to Africa and help deliver aid – that in itself is commendable, but as he spoke it just got weird as he talked about how he could drive there (from Scotland) and afterwards my husband and I both commented that something was a bit “odd”. Over the next few months there were several other conversations that did not completely make sense but we all just fudged over it, as you do.

About six months later my mum and dad moved and this really sparked a huge change in my dad – he loved the new house, but his conversations became increasingly weird (to us). Sitting in the car one day he said “who is that man standing at the corner watching us” – there was no man. During the day, and in the evening, he would insist the dog (who loved to be outside and play) was brought in after just a few minutes; when asked why he said “because of the people in the woods watching” (their house backed on to a small wooded area). Later, he claimed that he saw people with guns in the trees and also snipers on the neighbor’s roofs. At the same time, we noticed he had started to walk strangely; he walked a bit bent over and not as well as he used to.

My mum took him to the GP and also a the local hospital – the GP was stumped and the tests at the local hospital were done well by my dad i.e. he recognized his name, who the PM was, the year, a hippo etc – however for some animals he could not quite get the names out. We knew there was something just not right and I googled the symptoms and there it was – Lewy body dementia. I knew instantly that was what was wrong as the symptoms are so bizarre, but was a bit annoyed that it took me, a housewife, to diagnose what a doctor could not! Mum went to the GP herself and said this is what we felt he had and luckily, he was then referred to a different local hospital and was lucky enough to be assigned a consultant who was well up to speed with LBD.

All this time, a period of months, my dad got worse with the hallucinations to the extent he did not want to go out, or to be left alone – his sleep became erratic and it really put a strain on my mum and the whole family. Luckily, after a couple of non-starters we got the right mix of medication and were so lucky that we were put in touch with local groups who welcomed him to attend their activities – there was walking football, a putting group and a general chatting group – this allowed him to mix with others and participate in activities in a secure environment and to be mentally stimulated and also gave my mother a break. We also got him videos of Dundee (his hometown) in the old days and he loved being able to see where he grew up and to talk about it, we also got jigsaws made with familiar scenes on them. One thing he loved was a small exercise bike which allowed him to sit at home in his chair and pedal away. He did this and lifted very small weights. It worked for him and he got really into a routine. My mum also allowed him to walk the dog – which although a worry for us, kept him active although he walked with the LBD glaze and the stoop.

Sadly, his health did deteriorate, and he did not sleep at all at night, but napped a lot during the day and nothing we did could turn this around. He also could no longer dress himself and needed help to go to the bathroom. Yes, there were accidents during the night, but he was kept at home and looked after by my mum for as long as possible.

Last year, for everyone’s sake, he was moved to a care home. He was still able to recognize us and to come along on local outings e.g. to coffee shops and for drives. He shrank and lost a lot of weight but was still able to have a laugh. Before he went into hospital his voice became softer and softer and he got a speech therapist in who gave him exercises to do – this helped for a few months but then his voice started to fade and it was difficult to hear him at times – but he did still like to have a laugh and did understand things.

Last September (2018) he caught an infection and the doctors decided that there was no returning from this. The GP decided that a “just in case” care package be introduced; yes, it is called that and yes, it is awful. This effectively means that they will not intervene. There will be no fluids at all (not even a sponge to the lips) and no food given. All they do is provide pain relief (morphine). My dad lasted almost three weeks like this and we had to sit and watch him waste away before our eyes before he eventually passed on October 19. I don’t know if he would have recovered from the infection – no one can say. The end was horrendous and for the last 10 days or so we were willing him to pass. It was 7 years from diagnosis to his death. LBD tried to take him but, apart from the last three weeks, it did not really win; he knew us, he knew we were there, and he still had a big part of who he was left. I hope he is at peace now. 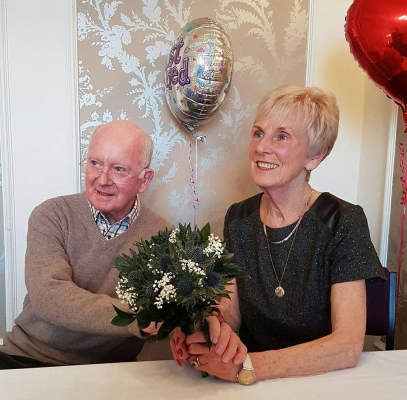