LBD Was His Kryptonite

Death does not sound a trumpet. – African proverb

There were no trumpets, or any heralding anything. Just quiet, and then he was gone.

He slept all day yesterday, occasionally making a slight moaning sound as he drew in a deep breath, his Cheyne Stokes breathing pattern causing a long pause, seemingly lasting forever, then a series of short pants as his lungs attempted to remedy the oxygen shortage. This has gone on for the past three days. Initially he was restless, even thrashing at times, but then he slowly calmed down over the course of a couple days. Yesterday morning, he felt warm, his hands were warm. The nurse came to check his temperature and it was 101.1. We debated if it was sepsis, or simply his autonomic systems and his losing his ability to regulate body temperature. The staff gave him some Tylenol to regulate body temperature and make sure he was comfortable.

This is how his final days went, slowly, quietly, without much fanfare. Occasionally a resident of the memory care wing would stop in, she is very distraught about dad’s passing. She really had a thing for my dad and she’s losing a buddy. She told me yesterday afternoon he and she were going to run away to ‘Crawford Manor’ together. Some of the staff would poke their heads in and send their condolences, but in general it was quiet. I spent a good deal of time talking with my stepmother and my sister, who was a rock these past couple days.

So, Lewy body dementia was his kryptonite, and he was my Superman. A man who taught me a lot about how to treat people, and how not to treat people. How to be strong, yet sensitive. He taught me to use my analytical mind to solve problems and find solutions to any form of challenge. He was a super-fan of mine, supporting every hobby, whim, and decision. He was so proud for my accomplishments, but especially proud when I received my PhD. I am so thankful for these past 3 years in which I got to spend time with him, and he had the opportunity to make such a positive impact on my daughters’ lives.

I miss you already Dad. Godspeed. 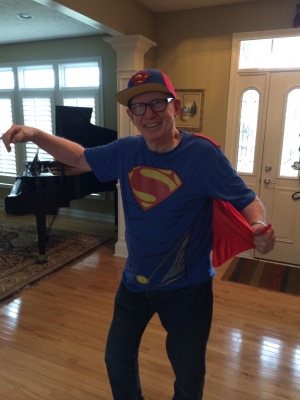