I Speak for My Father: A Daughter’s Story

I SPEAK FOR MY FATHER: A DAUGHTER'S STORY

Ayn Rand states that altruism should never be confused with goodness, kindness, to others or respect for others and that the absolute of altruism is self-sacrifice.

This is the truth every caregiver knows. Dementia is a word that evokes fear and sends us scurrying away from a fate we do not wish to acknowledge. We conjure up the common misconception, visions of dribbling, incontinent, blank face beings who have been robbed of their basic independence. There is more to dementia than the end stages.

What is dementia? There are over 283 identified neurological diseases of which dementia is a component.  The World Health Organisation defines dementia as;

‘..a syndrome—usually of a chronic or progressive nature —in which there is deterioration of cognitive function (i.e., the ability to process thought) beyond what might be expected for normal aging. It affects memory, thinking, orientation, comprehension, calculation, learning, capacity, language and judgment.

It is a terminal disease, there is no vaccine, no cure and somewhere in the world every four seconds someone is diagnosed with a dementia based illness.

Sacks speaks, reverently of the premise that ‘…we must deepen the case history to a narrative or a tale…the patient’s essential being is very relevant.’ Unfortunately, the majority of medical practitioners do not appear to have a clear grasp of this concept.  This was particularly evident at the first meeting with my father and his treating General Practitioner of 25 years. We were summarily dismissed with a display of patriarchal indifference, and a patronizing pat on the head. The advice — this was to be expected as one ages. Wrong. Dementia based diseases are not solely a disease of the elderly. There are recorded cases as young as two years of age, for example, associated with Batten’s Disease.

Dr. Alzheimer’s first patient was only 51 and patients with Lewy Body Disease had been diagnosed in their 40’s.

As medical science has evolved and diagnostic techniques are refined, patients in their 20’s and 30’s are now being diagnosed with varying forms of Young Onset Dementia.

We were offered no counseling or referrals, no home help or meals on wheels; nothing to make life easier, no physiotherapy or ongoing assessments. My father was having hallucinations, these were dismissed, and the advice by Doctor X was to ‘get his hearing aids checked,’ no advice was provided when or if my father should continue to drive or cease driving.

We went home and waited, we morphed from one set of symptoms to another. The disease was not static, sometimes ramping up its progress and at other times my father appeared completely normal, and this could all happen within the space of a few hours. Life was chaotic, and the disease wreaked havoc with our day to day existence.  Doctor X remained immovable in his conviction, that nothing could ameliorate my father’s condition.

Unsure of what to do next, I did what most people do today when faced with an insurmountable problem, I turned to Google and then to social media. I researched, compiling more information, reading medical journal abstracts with the aid of a dictionary, to assist my understanding of the technical jargon. Eventually, I arrived at a point where I was convinced my father was suffering from a neurological disorder known as Lewy Body Dementia or Diffuse Lewy Body.

Armed with a folder of documentation, a liberal helping of determination, a diary of behaviors, and drawing on my experiences in nursing, I made an appointment to see Doctor X.  I imagined kinship with Don Quixote. I knew I was embarking on a voyage that would take a tilt at the establishment, a prestigious, authoritarian, and elitist windmill.

The appointment did not go well. Doctor X was unwilling to discuss or listen to my theories. In his words, I was, ‘an overprotective, neurotic, female, not trained to diagnose disease, and unwilling to accept the onset of the natural aging pattern.’

Doctor X’s behavior is reflected in Oliver Sack’s work when he speaks of the analogy between science and disease;

"…therefore serve as a warning, and a parable — of what happens to science  which eschews the judgemental, the particular, the personal and becomes entirely abstract and computational."

Angry and disappointed, we found another Doctor. Following an appointment with my own Doctor and we had an urgent referral for my father to local geriatrician with an excellent reputation.

Part 2:  Knowing the Disease — what is Lewy Body Disease?

It is the most difficult to diagnose and the second most common of dementia based neurological illnesses.  First diagnosed by Dr. Lewy in 1912,  ‘it was not consistently recognized until 1996, and not listed in the International Classification of Diseases until 2005.’

Dementia based illnesses are not a natural part of the aging process, and there is more to dementia than Alzheimer’s.

Part 3:  Living with Lewy Body Disease – Dad and Me

Our journey was over a six-year period.  In retrospect, the disease had been obvious for at least five years prior to diagnosis.  My feelings toward ‘Lewy’ fluctuate as widely as the disease itself.  It drove us to the edge, it threatened relationships, caused physical and financial hardship and taught us that life is not fair. I am grateful to ‘Lewy’ because it allowed me to get to know a wonderful, intelligent and reserved man in a very special way. I became his voice, his advocate, his protector. I was closer than a lover; we had an intimate connection that even death cannot break.

When he died part of me died with him. Ayn Rand was correct; altruism is the destruction of self for another. Any caregiver will tell you; it is part of the caregiving experience. 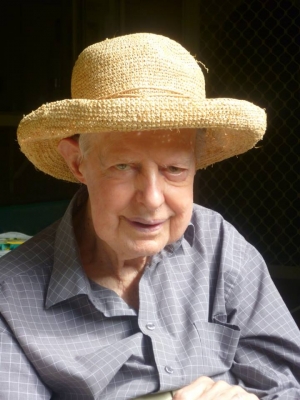