Goodbye to My Steam Man

Lewy Body Dementia (LBD) takes prisoners, and it does not discriminate. When LBD targets someone, there isn't a cure and no escape—it’s a one-way journey with a guaranteed rough ride at the end. The only variables are duration, and how long the caregiver can hold on.

My husband’s death certificate lists Lewy Body Dementia as a cause of death: 3 little words represented a huge change lifestyle and expectations for us both. It was a long time coming, and as the passing of increasingly difficult years, a growing challenge to recognize, and finally, learn to live it. LBD is insidious. When death comes, for most, it is a blessing.

My husband was James Burke. We called him ‘Burke’ or the ‘Burkeman.’  He was a brilliant man: holding patents for his work in power-generation plant designs. He was a creative man: a writer and photographer chronicling the history of steam locomotives in America. He was an active man: chopping firewood for our woodstove, working in the plant before retirement (as a mechanical engineer), and after retirement, taking long daily walks (5 miles or more) in the woods and mountains where we lived for over 25 years. He was a traveling man: who loved to explore the American West, photographing and writing about it—he loved history and maps. He was a western man: born on a farm in Kansas, he always wore boots, hat and exemplified the manners and traditions of his early upbringing. He was a man of humor: he could keep us laughing with ‘Burkisms’ which expressed his unique outlook on life.

He was all these things, but in his final years, he was also a terminal prisoner of Lewy Body. It’s hard to say which came first: mental or physical decline. Both took a heavy toll, rapidly escalating at the end. But Burke was also a tenacious man, and he refused to give up. As the disease robbed him of mobility, and eventually the ability to write and to think clearly, he continued working on his two final railroad books (which we will publish posthumously). We still went for walks, but with a walker. We still traveled, but I had to drive because his poor judgment made it dangerous for him to do so.  It broke his heart when he had to stop. He knew when he was having a hallucination or delusion, and found a way to joke about it afterward. He edited and contributed to talks I gave and books I wrote about caregiving, which told a lot of his story…and mine.

James Burke died at a hospice center on April 20, 2017. We celebrated his life 15 days later with a ‘Silverton Send-off.’ Over 100 friends from around the west gathered to greet the ‘first train of the season,’ when a Durango & Silverton Narrow Gauge locomotive steamed into Silverton, Colorado. Afterward, we had ‘a beer and a burger for Burke’ at Handlebars, our favorite restaurant. The Burkman was toasted by many, including good friend, artist, and D&S engineer, Jeff Ellingson. Six years before, Jeff  had presented my husband with an original painting of ‘Burke’s Curve.’ The watercolor was inspired by one of Burke’s photographs, taken at his favorite spot in the canyon below Silverton. (That photo was used on the cover of All Aboard Magazine, which we had published for the railroad, and which is now part of a memorial tribute to Burke.)

We said our final goodbye to my ‘Steam Man’ in September 2017. Our RR friends made a special run through the canyon. As they steamed past ‘Burke’s Curve,’ blowing the whistle loud and long, they placed his ashes in the firebox, sending him heavenward in a cloud of steam and smoke.  Wherever he is, I know he loved it!

James Burke will be remembered. His historic photographs and negatives have been donated to the Santa Fe Railroad Historical Society. Many of his books are now at the James Burke Memorial Library at the Durango & Silverton Narrow Gauge RR Museum, which also has an exhibit of Burke’s Curve. Other books and railroad memorabilia are in museums in Kansas, Oklahoma, Texas, Wyoming, and New Mexico. 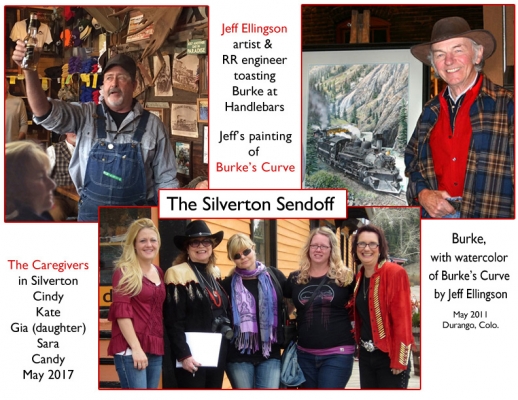 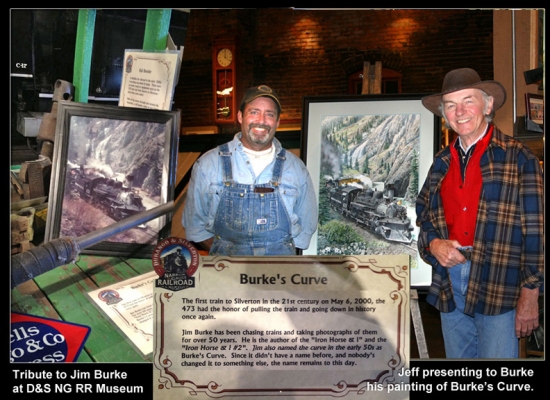 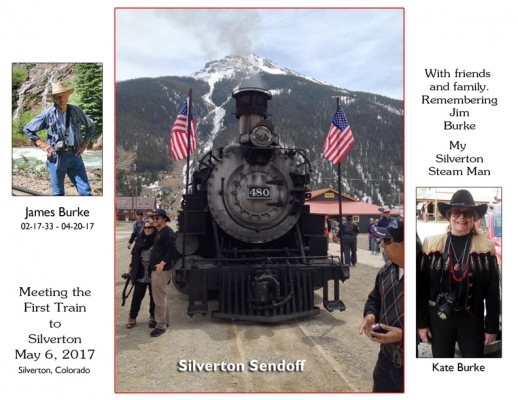 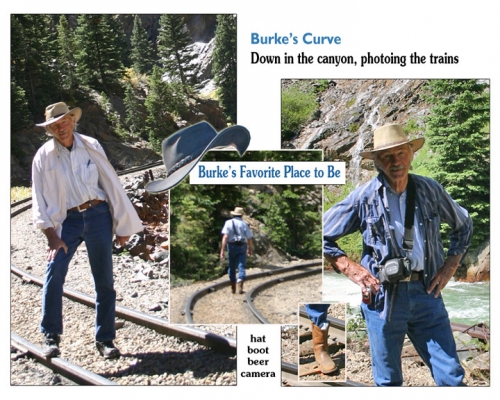