When I look back, my mother Dorene showed symptoms of Lewy body many years before I realized that something was very wrong. Through the years she was diagnosed with vascular dementia, Alzheimer's, or just dementia. It wasn't until she was in assisted living that a visiting doctor asked me if I thought my mother had Alzheimer's. My parents had a neighbor that had Alzheimer's, and my mother didn't act the way that she did, so I said no. He then went through a list of dementias that I had never heard of that she might have, one of them being Lewy body – one of the hardest dementias to control and treat. I went home determined to research the list that he'd given me. When I googled Lewy body, I was shocked to discover that my mother had every symptom of Lewy body that the article listed. Had I known about Lewy body when my mom started the journey into dementia, her last few years would have been very different. My best guess is that she had it for eight years.

I realize now that one of the first signs was her loss of smell years before the dementia appeared. Then she lost sixty pounds in a matter of months. Next came the chronic runny nose, memory loss, hallucinations, Parkinson-like symptoms of muscle rigidity, shuffling walk, tremors. She rarely slept, only taking short naps. Her body insisted that she walk continually, until she collapsed. She took medication for depression, panic attacks, and hallucinations. A panic attack would shut her mind and body down, leaving her utterly helpless. Once, on a shopping trip, overwhelmed halfway through the mall where it was noisy with lots of people, she suddenly couldn't walk. I was left holding up a woman who was dead weight and couldn't take a step. Security had to be called to bring a wheelchair to get her to my car. She became upset because people were looking at her. This episode brought on a panic attack and by the time I got her back to assisted living she wasn't making any sense.

I remember giving her a piece of gum one day and she didn't know what it was, or how to use it. She was positive that most of the clothes in her closet didn't belong to her.
One day when I saw her without her glasses, she insisted that they were stolen and that someone replaced them with a different pair that weren't hers. She then refused to wear her glasses for weeks because they weren't hers. She started having a hard time communicating, and was confused about most of what was happening in her life.

I had to put my mother in Memory care on the 26th of September, 2013, after a urinary tract infection that triggered a major decline in her dementia. My 92 year-old father could no longer take care of her, and the situation had become dangerous when she found scissors and cut up her bras and the tubing on my dad's hearing aids. Her dementia rapidly progressed and she was put on Hospice care.

My mother, especially at the end of her life, wasn't easy to care for. I described her Lewy body as living in a horror movie in her mind. She thought she was being poisoned when given her medicine, or that she was going to be killed at any time. She made daily rounds of the other residents rooms and took whatever caught her eye back to her room, causing me to remark that that if she knew how she was behaving she would be horrified. But the morning she died, I saw employees cry, kiss her, and stroke her hair.
My mother passed away on the morning of December 21, 2013 of a horrible and hideous disease that destroyed her mind and eventually her body. 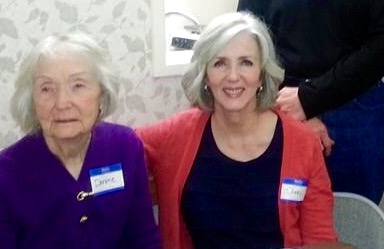