Cats, Babies and Other Dimensions

As my mom lay dying in her hospice room, a little kitty curled up at her feet, leaving a warm spot at the bottom of the bed.  I had never seen this kitty before, but there she was, sweet and full of purrs.  She stayed by my mother and kept her company.  This little kitty kept watch.

She was tortoiseshell in coloring, the same as our former cat, “Sunday,” who had passed on years ago.  We called Sunday our angel kitty.  She watched over us and paced the halls when I was out late.  Now here was another Sunday kitty as my mother’s life dwindled.

I never found out the name of the kitty, but to my mom, I called her “Sunday Cat” or “Sunday Kitty,” which always seemed to elicit a positive response from my mother, who was otherwise more or less in repose.

My mother lay in that bed and didn’t say a word.  Her eyes did not open.  She appeared to be sleeping, but she would respond silently to the things said to her.  She was peaceful.  She was calm.

I’m not sure how I expected my mother to go.  She had lingered for years, walking the line between insane ramblings and moments of glee.  Her dementia from the Lewy Body Disease made her behave like a child.  My father thought it was cute.  I was just happy she was happy most of the time.

But she was not my mom.

She started to have hallucinations, usually of people or babies walking around.  Once, I moved to sit next to her, only to have her yell at me to stop what I was doing.  When I asked her why, she said, “Don’t you see the baby there?”

I was amazed.  Obviously, there was no child in the chair.  If she were rational, she would know that. So, I placed my hand on the cushion as my mother winced and said, “Do you see, Mom? There is no baby here.”  Then I sat.

My mother was horrified.  She couldn’t believe I did that.  However, what followed next surprised me.

“How do you know there isn’t a baby there?  I can see it, even if you cannot.”

I looked at her for a moment and pondered.  “Mom, are you saying that maybe you are seeing people and things that are real, but I can’t see them?”

“Yes,” she replied, “What if I have been given the ability to see things you and other people can’t.”

Now, this was interesting and something I never considered.  Maybe she was.  What did I know?  While we have no knowledge of other dimensions at this time, what she was saying was entirely possible.  Our science just hasn’t discovered that yet.  Leave it to my intelligent mom to find reason for her delusion.

“Well,” I countered, “that is entirely possible.  But if you are, in fact, seeing another dimension, then you can agree that if I sit on this chair in this dimension, I am not hurting anyone.”

She wasn’t too sure about that.

“Mom, I want some of your drugs.  They make you see cool things,”  I said.  She laughed.

A couple of weeks after that conversation, I lost her entirely to the dementia.  The doctor said her fall was traumatic enough to advance the condition.

When I came to the hospital, she was coming out of the anesthesia from the surgery to give her a new hip.  Her head rolled, and she looked perturbed.  “Shit,” she said.

I laughed, but she wasn’t trying to be funny.  A stream of profanity came from her mouth, words I had never heard my mom use before.  In better times, she and I would have laughed together, but now she looked at me in anger and disgust.  This was something new.

At the time, I thought it was just the effects of the drugs from the surgery.  I thought maybe it was the pain.  I read books and articles to find out if this behavior was normal.  I had one person give me a bit of hope by telling me her strange behavior would last a few months, due to the shock, but she would come back.

The anger subsided, but it would come around from time to time.  I knew to never take it personally, but it was always hard to hear.  On one visit, she yelled at me, telling me I was a terrible daughter and that she was disappointed in me.  On another, she pushed me away and told me to get out because I never visited her, and she didn’t want to see me then.

Thankfully, these moments were rare.  Most of the time she was happy or, at least, docile.  She liked to make lists of things.  She always made lists when she was lucid.  Now she made nonsensical lists which somehow made sense to her.

She loved music, and she loved to dance.  Even with the dementia, she still loved those things, and they would always bring out her better qualities.  She would sing along to songs.  Loudly.  Joyfully.  Not always in tune.  This was the mother I knew.  The mother I love.

It was these moments I tried to hold on to when she was alive.  It is these moments I recall when I think of her now. It always seemed like a cruel joke to me that my mother’s brain became unhinged.  What was even worse was that at 69, she was young to have that happen.

Before the dementia, I always teased my mother about being an intellectual bully.  She never hesitated to correct my grammar, even as an adult.  Words, grammar, and diction delighted her.  She made her career as a writer and was a master wordsmith.

She understood the world and was the best giver of advice.  As her daughter, I rarely took it.  Yet, she always got that last laugh.  In the end, she was always right.

The last moment of lucidity I experienced from her was at the very moment I needed it.  I was struggling with a divorce and financial loss.

On that day, she ushered me around, introducing me to everyone as her daughter.  This was unusual.  She always knew I was someone special to her, but she rarely could place who I was or even remember my name.  On this particular day, she remembered.

I had made the decision to not tell her about my divorce, but somehow, on that day, it seemed like I should.  When I told her, she looked at me and nodded.  At that moment, she didn’t say a thing.

She looked tired, and I assisted in getting her to bed.  I hugged her and gave her a kiss, then turned to leave.  She grabbed my arm.

She looked me in the eyes. I smiled and nodded. Then she smiled and drifted off to sleep. 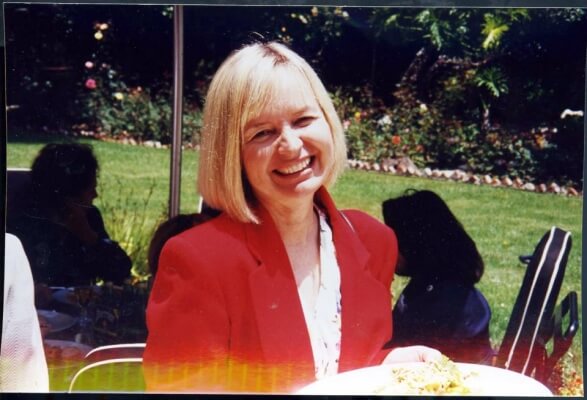