We just returned from the Cleveland Clinic. My husband’s meds weren’t changed, which is a good thing. Anytime they don’t need to increase anything, I always figure that’s good. While making the 5 hour drive home, I had an epiphany of sorts: Managing a progressive illness is really about medication, adaptation and attitude.

The medicines they have will not cure the disease. The best we can hope for is slowing it or making it easier to deal with. The disease will march ahead, claiming brain cells as little battles of victory as it proceeds with its destructive path. Not too unlike Sherman’s march to the sea during the civil war.

That’s where the adaptive part comes into the picture. Luckily, a disease like this one doesn’t happen overnight. It eats away in little increments allowing time for the patient and family to adapt. I often have to remind my husband (and myself) that the disease hasn’t stopped us from doing anything we love to do. We liked to travel–still can. Only now we no longer use our large 5th wheel camper. We bought a minivan and stay in hotels. When his driving became scary, I took over that chore, BUT we still travel. We can still eat out and fish and play with grandchildren.

And really, does it matter when he puts salad dressing on his spaghetti or answers the remote control instead of the phone? Does it matter that I have to help him sign in to his email (every time) or that he has trouble unlocking his car door to get out? Who does it harm when he turns the phone backwards or orders me a cup of coffee when I don’t drink coffee?

That’s where the attitude thing enters the picture. When the doctor asked my husband how he was doing, he said, “I think I’m doing well.” He said it with a smile and he meant it.

His answer surprised me. Things are definitely worse than they were 6 months ago, but my constant insistence that we’re doing fine has evidently sunken in. And that’s when it hit me.

We really are doing fine. We really are adapting and moving ahead with life. In the big picture, we’re better off than many of our friends who spend their lives fretting over small stuff that really isn’t important at all.

Life gave us a lemon. We might not be able to make lemonade, but a glass of water with a twist of lemon will still satisfy our thirst. And that’s the point, isn’t it? 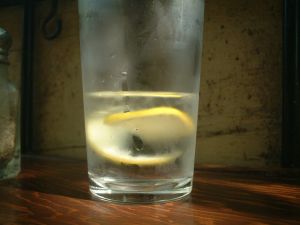