This is Lewy… my mom’s story

My mother, Alice, was originally diagnosed with Alzheimer’s around 2001, but had adverse reactions to the medication prescribed by her doctor. After several setbacks that required additional care in order for my father to keep her home, I returned home to care for my parents and allow them to age in place. Upon arriving in October 2004 I learned from the ER doctor where she had been treated for severe dehydration for two weeks immediately before my arrival, and nursing facility staff where she was transferred to after the hospitalization, that her diagnosis had changed to reflect Lewy body dementia. This was the first we had heard of LBD and her doctor was unfamiliar with it. I immediately started researching and joined an online support group for caregivers of Lewy body dementia patients. I did my best to “educate” my parents’ doctor about LBD vs. Alzheimer’s disease, but all the way to the end it was a battle. I even had to request that he change her death certificate to reflect LBD and remove Alzheimer’s from it.

This once vibrant woman who was an expert typist, seamstress, mother, grandmother, and friend, slowly became a shadow of herself. Some days she knew who everyone was and would chat with her best friend on the phone like nothing was wrong. The next she would be hallucinating like crazy. The next she would sit for hours in a somnolent state as if in a coma. From minute to minute and day to day, we never knew who she would be.

Alice had early signs that were not recognized as early signs of LBD. She developed severe spacial deficits and lack of depth perception that caused her to have several falls requiring stitches, as well as incidents while driving. She had REM sleep behavior disorder during which she broke the lamp on the nightstand with the phone receiver, and woke my father by beating him with the phone receiver. After hitting her head on the nightstand during a fall, my father removed the nightstand and everything on it to keep her safe. She also had suffered from incontinence for several years before the other symptoms appeared. In retrospect, seeing the list of early LBD symptoms, she had nearly everything listed. Despite her doctor’s insistence that it was Alzheimer’s, even at the end she displayed only 2 or 3 of the Alzheimer’s symptoms that overlapped with LBD.

We were told Alice would have at best 4-6 weeks to live after we took her home from the nursing facility; however, my father and I focused on her and created a daily routine around her needs. She was never the old mom I remember, but she did bounce back and actually thrived for 16 months after her hospitalization for severe dehydration. A little tender loving care goes a long way in enhancing their quality of life. On October 7th my mom would have turned 101 years old. She is still missed every day by her children, grandchildren, great-grandchildren, great-great-grandchildren, and many extended family and friends.

The photos are of:
• Alice & Art, her husband of 68 years, with their great-granddaughter Jordyn at Christmas 2003
• Alice and Liz, her daughter, in the spring of 2005, just a few short months before her death. 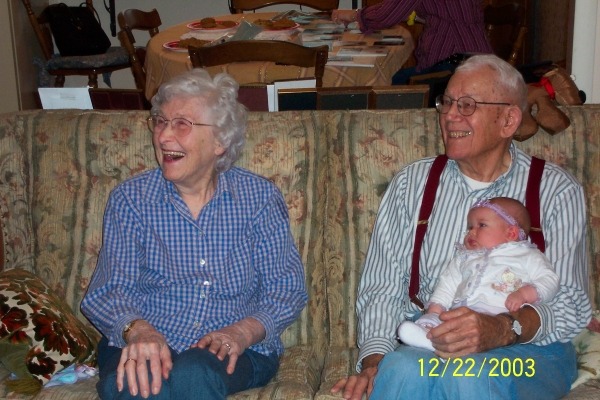 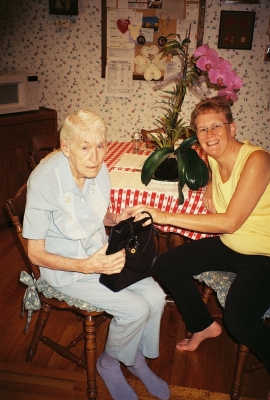