This may be as close as I get to writing that book on caregiving I always said I would do.  It was only after my Mother passed away that I got some answers to what had shortened the Parkinson's Disease life span.  It makes sense now, regrettably.  It was Lewy Body, I am sure of it.

Mom was diagnosed in Sept. 2007 with having Parkinson's Disease.  She had the hand and ankle tremors, a little, a little shuffling, no big deal.  She even disputed the doctor's diagnosis, he's too young, he can't know without tests, etc.  We hadn't figured into the mix of data that she had already had some falls, roller coaster blood pressure, handwriting was changing.  So, they told us she probably had the PD for 2-3 years at diagnosis.

Fast forward to Thanksgiving Day 2012, lots of falls by now, she isn't driving anymore, goes to senior day care, voice is weak, mind is confused.  She fell again that day and broke her leg and ankle in 5 places as she rose up from the dining room chair and her foot was wrapped around the leg of it, twisting it 180 degrees.  The surgery to fix it would be the changing point in our lives. Up until now, it was a slow process.   When she woke up from the anesthesia, she says to me, you better watch out for these people, they are out to kill you.  No, mom, you just had surgery and a bad dream.  Then I remembered how she thought the neighbor was acting strange, the home remodeling show was ripping off people, and other paranoia.   So, then we thought she had Parkinson's with Dementia.

She was only home 4 months from the therapy on her broken leg before she had to go back to the hospital for delirium, I thought it was from a UTI infection again. It was and the UTI infections made her worse.  From the hospital stay she was sent to rehab again.   In a month's time, she was rigid and couldn't open her mouth at will and quickly lost her ability to swallow enough nutrition to maintain her weight and had a feeding tube implanted.  But not before the doctor and nurse practitioner at her rehab facility dropped the LBD bombshell on me and encouraged me to let her pass on.  Well, I didn't trust the LBD evaluation (guesstimate) and what was LBD anyway?  I went to the internet, like with every new drug or symptom she faced, and didn't like what I read and didn't agree it fit her at that point.  It hadn't been mentioned by her neurologist or psychiatrist, these people must be way wrong.  So, we proceeded with the stomach feeding tube and she went to another rehab faciltiy after that surgery.  One year later she was released from there to go into long term care.  She still stood for transfers and talked a little at this point. She was even allowed pleasure foods by mouth if closely monitored.

Along the way, there were countless medicine accidents and care deficiencies that I thought I would nearly go crazy myself.  I would still see Mom peek out from the cloud of confusion, wake up long enough to get eye contact, maybe an "I Love You" whisper, a giggle in her sleep.  One day, March 21, 2015, to be exact, just before her 79th birthday,  she was so normal she talked a little, stayed awake and drank sips of coffee.  A truly great day.  But gone were the days of standing and most communication.

Her agitation is better in 2015, probably because her medicines increased.  Her agitation and leg movements are better, the sweat break-outs are less frequent, she is more expressionless, she sleeps more.  Most days in the later part of the year she doesn't know I have come for my daily visit.

She got pneumonia and stayed in the hospital a couple of weeks in September.  She improved but required a lot of suctioning,  her coughs are not strong enough to clear her lungs or aspirations anymore.  I got my last "I love you" and smile on Sept. 11.  They returned her to the care facility on September 25 and she passed away in the early morning hours the next day.  Care had not been taken that night to keep the hospital regimen of continual tube feeding.  She had aspirated, she was gone, she was with Jesus now.

I saw an interview on the television with Robin William's wife and she explained that his autopsy had revealed LBD.  He did have depression but he was stating to her his last year that he felt he was going crazy.  My research began.  Every symptom I read about, Mom had.  The fast decline her last summer makes me believe she did have the LBD.   I do take comfort in knowing she was on the right meds and I did all that I could to let her know she was loved and cared for.  I miss the sick her and the well her.  I will see the well her again one day. 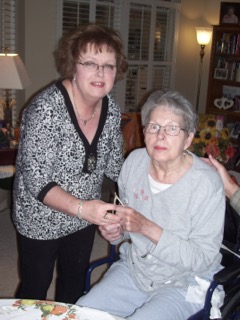