The Crux of the Matter

When my wife and I first received the diagnosis of dementia with Lewy bodies, it was not as much of a shock; nor was it a surprise. After 18 months of testing we both knew it was coming. Along with the diagnosis came all the thoughts that surrounded “what now”. All the sudden life changes, any preparations we could make still would not really prepare us for the road ahead. Thankfully, I was diagnosed early enough in the disease; better sooner rather than later.

Medical retirement was now upon us; we were prepared. The savings, 401K’s, Veteran’s Affairs, military retirement, Social Security, etc. were already in place. However, since all my retirement was vested in the Federal Government the amount of paperwork was frightening. It just took a bit of administration and some patience. (That that meant hurry up and wait. After 40 years with the Army that was a skill of expertise for me.)

We moved closer to be near family, which was no fun. (In fact, if anyone thinks that moving is fun then they need a lot of help.)  Wendy believed that when I started to deteriorate she would have the help of her daughter in my care. In addition, my near-term memory was fading a bit which made it difficult with a lot of tasks. So, on June 29th with the help of friends off we went.

My wife’s health was not the best. She just spent 3 weeks in the hospital with a traumatic brain injury.  Little did we know that she would die in just 84 days. Now more than ever my daughter was needed to assume the role of care giver. While that would not be too difficult now, that will change, most likely, in just a few years. The move should have been placed on hold, but that was not be. When the matriarch puts her foot down, she must “be obeyed”.

Soon after we arrived (from Oklahoma City to Atlanta) her health turned for the worst. This was her fourth hospitalization since July 1st, all more severe than then the last.  The five-hour operation resulted in over 400 cc’s of blood removed from her head. The possibility of a loved one’s departure from this world sets one to deep prayer and reflection, even more so then your own mortality.  She passed on September 16, 2016 and the reality hit – she was not going to be here another moment. My life had to go on.

With that, this first article is written as a reflection much like “A Christmas Carol” by Charles Dickens. Ebenezer Scrooge was fortunate to get another chance in life despite a lifetime of despicable behavior towards others and live it to the fullest greater good. This disease, for those lucky enough to be diagnosed early truly, has a second chance to live life and enjoy its splendor and beauty, whatever that is. No pity, no remorse, just joy that every moment should and will be spent making this life a better place then we got it.

So, here are a few ponderable thoughts:

First, if nothing else get spiritually centered. For me, that means be right in the Lord. I find peace and comfort in knowing that His light always shines down upon us. No matter what the situation God is in control. When the 23rd Psalms states “The Lord is my Shepherd, I shall not want…” I believe it means just that; everything I will need in this life is provided. The only thing the Lord wants me to take control of is my attitude. No matter how hard, my positive attitude is paramount. Each day brings new adventures – new highlights, new joys. The alternatives take way too much energy.

Second, learn from the past so you can plan for the future. This will allow you to live today. For example, how did raising your children prepare you for the next stage of grand parenting? Just like savings for retirement, did you learn anything from ‘a penny saved, is a penny earned’? We have a future; it is just a little unpredictable. Create a ‘bucket list’ of things you want to do. Then go do it with your family and/or significant other. Each time you check something off a new adventure starts. That is just plain excitement and happiness.

Third, take nothing for granted. You may have an awful diagnosis but let’s put it in perspective. There are things far worse, like if your spouse is near death and there is nothing other than prayer you can do to help. Open your eyes to your surroundings and see things that eluded your sight all these years. Then, relish in them.

Fourth, if you are young enough, plan for retirement and that ‘rainy day’. We are mortals and cannot predict the future, no matter how much we might like to. A proper plan today will lead to peace and security when the time comes. Believe me, it does come and not on your schedule.

Last, each day is precious. Treat it as such. We know what it is like to not know if there will be another. Each day do a random act of kindness. Despite our disease, paying it forward is healthy and makes one appreciate the glory provided to us by God. 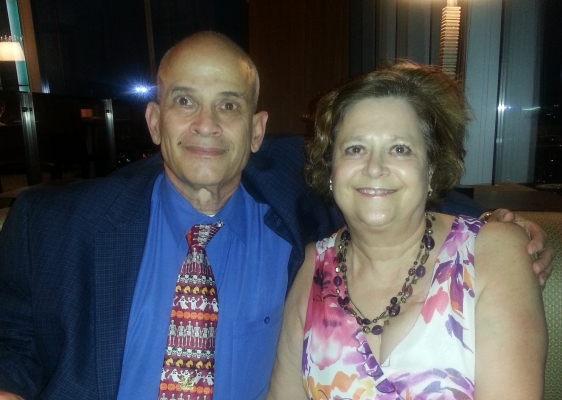