Our battle with Lewy

I am going to tell our story of our fight with LBD … Let me start at the beginning.

Daddy had corneal transplants. We would joke back and forth (daddy and I) about him getting the surgery and how they always said that you would see what the person who’s corneas you were getting would see… when he first started hallucinating, I thought he was joking. I wish he was joking, but he wasn’t… I have talked to many people in an LBD group who all say their loved ones symptoms started when they had a major surgery.

The first memory I have of the battle with LBD: I was at a company Christmas party in 2015 when I got the phone call that daddy was outside with just jeans and a thin shirt in December. Mom was in the hospital because she had just had surgery, I rushed from the party to find out what was going on with daddy. He said he was trying to find his home… I was confused, because he was at home. We ended up calling the ambulance to get him checked out…. they sent him home with no explanation. Vicki and I spent that night awake with daddy. He was packing his bag to go “home” I remember being so exhausted, we finally got daddy to sleep on the couch for a bit around 5 am maybe, then when Vicki and I dozed and woke up, daddy was gone. He had driven to see mom at the hospital like nothing had happened the night before… That as the first time I was truly scared about what was going on with daddy.

Next came the diagnosis of schizophrenia…really? My dad the brilliant nurse, the one who amazed me with his knowledge. We took him to neuro, to his primary, to psych, no one had answers, or if they did, they were dumb. My dad didn’t have schizophrenia. I remember driving home from one of his psych appointments where they just took him in the room for 5 minutes and handed him some prescriptions. We were talking about random stuff, I looked over at daddy and said “do you know my name?” That day…. that day, my heart shattered into a million pieces, he asked me not to be mad, but no, he didn’t, and I didn’t cry. I wouldn’t cry until I dropped him off. I never wanted to cry in front of him, I just said it’s ok daddy, I am Erika.

At this point, we were trying to find any explanation for daddy’s symptoms. One doctor gave us a scare and told us daddy had a 99% chance of having prostate cancer, which would have explained some of his symptoms, but later tests showed that they were wrong. Dr. Causby, one of the amazing vets I had worked with mentioned a geriatrician had seen her dad. I figured it couldn’t hurt… I googled geriatricians in the area and found one in Raleigh. In August of 2016, I made an appointment to take daddy to the geriatrician I found and within 15 minutes of being there, we had a diagnosis. Google is never your friend, in that case, reading what Lewy Body Dementia was about and the prognosis. Wanting nothing more than for him to be wrong, the geriatrician started my dad on some medicine to see if it would help. Daddy just seemed to get worse, his hallucinations, barely talking and eating. We were scared we were going to lose him then.

Chanda had done some research and found a neuro that specialized in
LBD at UNC and, honestly, I don’t even remember who called to make the appointment regardless, we got daddy in and seen. They had initially said that it would be months before they could get him in, but by the Grace of God, it was sooner. They started daddy on two different medications, and it was like a light came on in daddy. I remember telling him one day that it was nice to have him back, he even told me he remembered the day he felt like himself again. You don’t know how amazing it is to see your daddy go from barely there to being himself. We got a good year out of those medications, we got holidays and birthdays with daddy, then the disease started to progress, and we switched to a new medication and tweaked his others, but nothing worked. Daddy was slowly slipping away from us.

Then came the catatonic seizures. I think he only had two that I recall, but they were scary especially when I wasn’t home, and I get the call to get home ASAP, daddy’s disease started to take over. He was hallucinating more; he was not eating as much, not drinking as much.

Most people have never heard of LBD, it is a combination of Alzheimer’s and Parkinson’s and eventually, the Parkinson’s kicked in his hands would drop, he would try to drink a drink, and it would just fall. One night in December, I got a phone call that daddy had fallen, and it was a pretty bad fall, he had hit his head. We had him taken to the ER early the next morning because he said he was hurting. They did test, gave him medicine that he shouldn’t have had because it makes the aggression worse in LBD. Anyway, they sent him home saying very little.

I remember talking to mom on my lunch break one day, and she asked me to call Nanci (the PA at his neuro) and let her know that we could no longer get daddy out of the house for his appointments. She then told us that it was time to start hospice, one of the worst calls I had to make to transitions and telling the we needed to switch daddy from palliative to hospice.

On December 13, 2017 is when the hospice came in. They started daddy on pain meds because his back and hip were hurting him. I won’t go into details about everything, but it was a rough decision and a very painful one. His nurse came out and said that she thought he had a brain bleed and pneumonia. The boys and I camped out at mom’s house every night, helping where we could… or just being there.

On December 15, 2017, I was asleep on the couch, waiting for my alarm to go off so I could give daddy his medication. Instead, I was woken up by a tearful mom, telling me it was time and that he was gone. Daddy would have wanted it like that, just him and mom alone in the room. I remember calling Chanda to tell her and then everything else was a blur.

The point of this story is to make people aware …. Lewy Body Dementia affects about 1.4 million American’s alone and it is one of the most misdiagnosed diseases out there. Just know the signs and symptoms.

I know we have all lost loved ones, and everyone’s loss is different, but it sucks to watch your loved one suffer for three years and not be able to do a damn thing about it. I feel like I let him down by not being able to save him and I miss him every damn day. The song I am going to post in the comments, it is how we all felt, every day… about daddy.

Anyways, thanks for taking the time to read this and understand a little more of what we went through. We love and miss you, daddy, <3 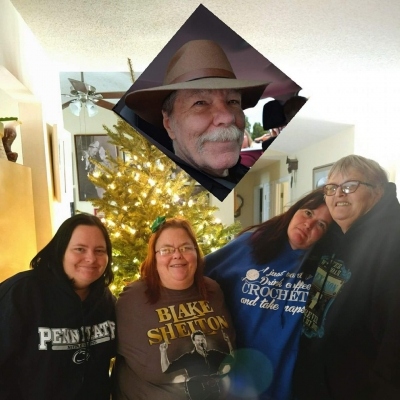