My mom, Catherine, began exhibiting symptoms of dementia with little things that her doctor attributed to aging.  However, I knew different. She unexplainably fell and fractured her shoulder. She was unable to multi-task when cooking.  Grocery shopping took hours. I would find perishables in the cabinets and items such as keys or dish sponges in the refrigerator. She was formally diagnosed with Mild Cognitive Impairment in December 2013, but while waiting for an appointment with the university neurologist, she fell at home and broke her hip. The combination of the surgery and anesthesia inflamed the dementia into full-blown delirium. My mom recovered enough physically to walk with a cane, but never fully recovered mentally.

The neurology team diagnosed her with Alzheimer’s, vascular dementia, and suspected Lewy body. My mom exhibited all of the symptoms of LBD including chronic runny nose, visual hallucinations, a shuffled walk, extreme anxiety and depression, sundowning, and sleep disturbances.  She would go days without sleeping, yet had to walk constantly.  My mom sometimes didn’t recognize me and thought there was a “second” daughter with my name who never came home. She would call me from the next room to ask me where I was, even when she just walked out of that room.  However, there were times that she seemed perfectly normal, especially around family or friends who visited.

As she progressed, her symptoms only became worse and it became impossible to take care of her and work full-time. I went for weeks without sleeping because she didn’t recognize her surroundings. She would consistently pack clothing into bags because she thought she was on a trip and was ready to go home. After her first wandering instance, I knew I could no longer safely take care of her at home and after unsuccessful attempts to find caregivers to take care of her while I worked, the difficult decision was made that she needed a care facility. At the same time, she developed a case of severe bronchitis and was hospitalized in October 2015. From there, she went to skilled nursing until a facility could be found that would accept her due to her aggression, confusion, and tendency to wander.

My mom slowly declined over the next two years, losing over fifty pounds and developing aspiration pneumonia in January 2017. She was released back to her memory care facility on hospice with a pureed diet, and improved despite numerous falls, including one where she fractured her rotator cuff.  Another bout of aspiration pneumonia and a stroke/brain bleed brought on the last stages of the disease in August 2017.  She was moved to a total care facility, again on hospice, where she is slowly declining.  She can no longer walk, talk, or hold her head up on her own. She just recently began having difficulty swallowing even pureed food. My beautiful, strong, brave mother is in her final days and weeks from this horrible disease. 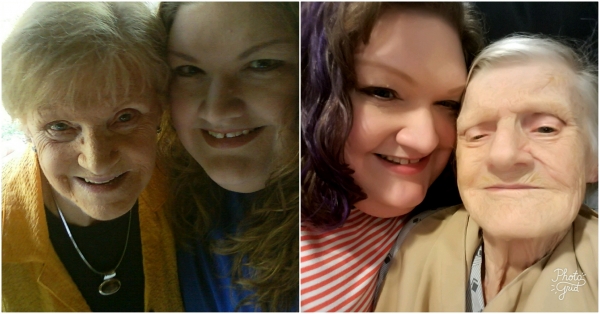