My dad is 75 years old and has been having active dreams and talking in his sleep for about 12 years now. He and my mom had to get separate beds as my dad was hitting her in his dreams and she was having a lot of pain from osteoarthritis, stenosis and degenerative disk disease already. My mom would ask my dad if he remembered what he did the night before and he would say that he had a good sleep. My dad, unaware of what happened felt really bad. My mom said that dad was probably sleepwalking also because they lived on the lake and one morning my mom noticed my dad’s shoes were awfully wet. She figured he must have gone into the lake at night. Apparently, he did sleepwalk as a child.

My dad was a very intelligent, hard-working man all his life. He was a welder and designed farm machinery. He was always good with his finances and keeping track of his books.

My parents moved to town in 2010 because my mom could no longer do much anymore and they would be where they had more conveniences such as doctors, stores, etc. In 2012 my only brother passed away of cancer at the age of 47 years. Just leaving my sister and I. I live in town, and she lives 3 hours away. My parents seemed to take it well, but I can see how it has aged them a lot physically and mentally. My mom ended up in a wheelchair with a hospital bed and oxygen at home. My dad was her caregiver.

Dad started losing items and was constantly searching for them. He was having a harder time with his driving. Otherwise had a hard time telling the time of day and keeping track of the bills and finances. He was waking up at night to go to the bathroom and couldn’t find his way back to the bedroom. He was still having the active dreams. Suddenly my dad started hallucinating and talking to people that weren’t there. He would get up about three times a night thinking it was breakfast time and would have his breakfast over and over again. He would wake up my mom each time. It got really bad in three days and dad was admitted to the hospital in town. He spent a month there, and we had to have someone with him at night as the staff couldn’t always watch him. He was so active. They were scared he would go outside in the middle of winter, and they wouldn’t know.

My dad was admitted to the personal care home in town February 2016, and my mom went in one week later. We never expected dad to go there before mom. My dad had suffered from depression, anxiety, and claustrophobia for some years already. A geriatric psychiatrist diagnosed him with LBD. He is on Risperidone and Clonazepam. They have tried a couple of other anti-psychotics but they made the hallucinations worst. My dad hardly sleeps, and he is busy throughout the night. We had to take all of his furniture and clothes out of his room now as he was moving furniture and packing things up all night. He only has a bed in his room now. We were told by the personal care home that the less he has in his room the better it is for him, otherwise, it causes too much stimulation.

He has become paranoid, distrusting, and a bit more aggressive. He has been accusing my mom of having an affair in the personal care home, which is not true. We were told that there is no cure for this disease but they adjust his meds so he can be comfortable as possible. There are a lot more thing to experience yet with my dad. They don’t sound pleasant. I find it so hard to see my dad this way. He was such an intelligent man and now he cannot even tell the time of day or tie his shoelaces some days. This disease is so devastating for the patient and the family also. It just rips your heart out.
I wanted to share this story thinking it may help someone, somewhere. 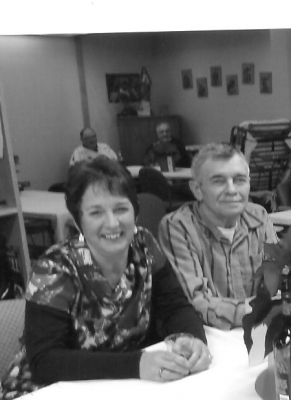