My mother died in 1999, two days shy of her 66th birthday, after suffering for about 10 years with LBD. Of course, we didn’t know it was LBD until very near the end because neither her primary care physician nor her neurologist knew what it was. She was originally diagnosed with Parkinson’s but then the cognitive decline happened as well, and she proceeded to gradually fade away.

Frankly, Mom could be somewhat ditzy and forgetful, and was no graceful creature, so we really have no idea exactly when her symptoms started. One friend of hers noted one day that she got confused while playing mah jongg. I observed her making a recipe incorrectly. But it was so easy to chalk it up to “slowing down” or “Millie being Millie.” In her last couple of years, she was completely helpless and dependent. She didn’t know her family, though she did smile at familiar faces. She was unable to communicate in any way. She couldn’t move. Ultimately, she couldn’t make the muscular contractions required for swallowing. At that point, we had a decision to make: keep her alive through forced nutrition via a feeding tube, or suspend nutrition and hydration until she died.

This woman gave me my life. Now I had to help make the decision to terminate hers. It was only mildly ironic. Though she was as defenseless as a newborn, she had no future. There is no cure for this mind-wasting disease. What little of her physiology still functioned was not capable of providing her with a meaningful existence. With sadness and regret, my sisters and father and I agreed she had suffered enough. An IV remained in her vein to give her morphine so that she would not feel distressed as her body’s batteries slowly ran out from lack of sustenance. We were told that without food or water, she would die in 1-2 weeks. If I recall correctly, she lasted 15 or 16 days.

On her last day, I said my goodbyes to her, thanked her for being such a wonderful, selfless mother, apologized for what I had to do to her, and kissed her. I sort of wanted to be there at the end, but she went when she was ready. I know that her skin was drawn tightly against the bones of her skull, but thankfully I can’t produce the image in my mind. When I think of her today, she is healthy and laughing. Even on the day she died, it occurred to me that it had been a very long time since she had been that way, her real self. Lewy Body Dementia is like those pods in Invasion of the Body Snatchers. For a long time, she still looked like my mother, but if you knew her, you could tell that behind her eyes lay a soulless impostor.

My older daughter (now nearly 14) was almost three when my mother died. Though my mother was far from her worst, the effects of the disease at that point made her stone-faced; she could walk, but had to be prodded. Mostly, her days were consumed sitting in one place, with a blank expression on her face. My daughter was a little afraid of her, yet also had a child’s wonderful sense of frank acceptance and compassion. To distinguish between her maternal grandmother, a fit one-time dancer who loved to get down on the floor and play with her first grandchild, and my mother, she called the former Grammy and the latter The Grammy Who Doesn’t Smile.

The truly ironic thing is that my mother would have found that very funny. But there’s nothing funny about LBD, or the fact that my mom had such a lousy end to her life. 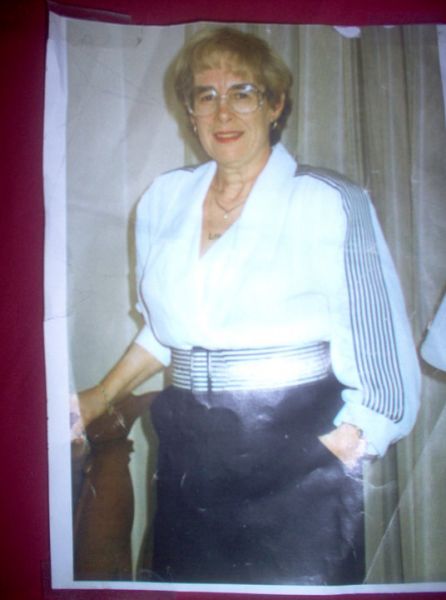