Funny, smart, caring not a mean bone in his body. We are a blended marriage; now married for 17 years. John is very generous and I, being independent felt a little guilty when he asked me to retire at 50 and move to Maine so that we could enjoy retirement together. Walking along the beach one day I said to him, “You have given me so much. What have I given you?” He answered without hesitation, “Myself”.

John was the epitome of patience and goodness. He never understood why anyone would want to hurt another person, either physically, emotionally, or psychologically. He was my rock. Always there with love and comfort.

Looking back, in 2006, he fell and had a concussion. The first memory clue manifested itself. We chalked it up to old age. The signs were infrequent and vague. I noticed that he had trouble mowing the lawn. He volunteered at the Seashore Trolley Museum on Wednesdays restoring old trolleys. He loved it, loved the people and all that he learned. Then one day in 2009 he told me he was afraid to climb a ladder.

Always a quiet and soft spoken man, it was hard to see if his socialization had changed.

I don’t know exactly when I asked, “When are we moving back to Philadelphia?” His response “When I can’t mow the lawn anymore.” His driving was ‘off’ and it frightened me. I would offer to drive and usually he would say yes. 2009 was the summer I paid a college student to mow the law. I announced to friends that we were moving back to Philly. It was very hard, especially for John. He loved Maine, our house, and friends. But Philly is home for him and a familiar place with good medical care. We sold the car shortly after our arrival in the City of Brotherly Love.

One day in 2011 – “There is something that just isn’t right.” he said. Then he was complaining of dizziness and double vision. We saw his Primary and after watching John walk down the hall sent us to a neurologist.

From there is was tests, tests, and more tests. Final diagnosis: depression and anxiety. No evidence of declining cognition. Old age. Early 2012 He did a few months of PT for his gait. By summer, it was not any better. I found another neurologist and sent all the notes I had taken since the beginning of his behavioral changes. John was diagnosed with Lewy Body Dementia on September 4, 2012.

More PT and OT. He had a few falls. One where I could not get him up in our apartment. We moved into a senior living facility. That was a year ago. It is where we need to be.

The year from November 2012 to November 2013 was the sharpest decline and largest invasion of the Lewy Bodies. He went from being able to walk without a cane to stuttering steps, using a walker or a wheelchair. His physical decline necessitates an aide to help him with ADLs. His executive functioning is such that he needs constant supervision and guidance. He is starting to have hallucinations more often.
Yet Showtime allows him to rally for others and be his almost normal charming self. The bad days are starting to outweigh the good, sad to say. I am so sad. I do miss him so.

The cruelest part of this disease is that he always knows when Lewy is present and what the disease is taking from him. 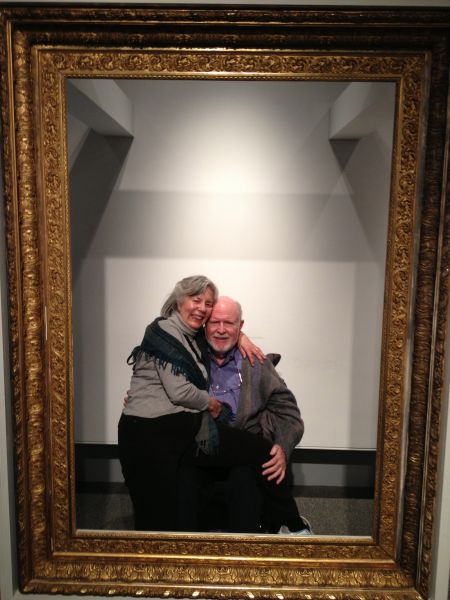