Coping with Pain Through Writing

Forget not that the Earth likes to feel your bare feet and the winds long to play with your hair.

He is standing alone in the middle of a field on a cloudless November day. Scattered around him, in not so tidy piles, are his memories. Memories accumulated over a lifetime that spans more than seven decades, two continents, three children and a marriage of over fifty years. The look that he wears is a mix of fear and puzzlement. How could this be? He has been told that a storm is approaching that will bring with it strong cold winds and darkness. His instincts drive him to gather as many of his memories as possible and cling tightly to them. That if he holds them close to his chest, perhaps the wind will spare them. But deep inside he knows that this wind sweeps all away, leaving behind only darkness. So he stands there, cemented to the very spot that he thought would serve as his perch to witness his final years unfold. He knew that he would one day have to relinquish his spot in the field – we all must.

But he thought that his bounty of memories would be the very things that would sustain him as his body surrendered its grip on this world.
He is already starting to feel the earliest ripples of wind brushing against his face; the vanguard of this approaching storm. He finds it ironic that this sensation of gentle wind against his body pulls him back to his earliest days of boyhood in Sicily. It was all before him then. It was all memories yet not made. But these are not the Zephyr winds of his youth blowing warm air up from North Africa. These are cold winds that gallop relentlessly across soon to be barren lands, taking with them all that lay in their path. He knows it is coming. He tries to lean into it to thwart its advance. But it’s a fool’s errand, and this too he knows. It will come. It is coming. And over and over he hears the refrain that he has been taught since boyhood in the incense-filled places of his Catholicism; memento, homo, quia pulvis es, et in pulverem revertis.

The Son
The long pauses during weekly telephone calls begin to occupy more time than the strings of words spoken as if from the recesses of a cavern. Dad, are you still there? He was never larger than life; the language and cultural barriers erected at age 25 when he plunged headlong into this New World prohibited that. But he was always engaged. His son was the first fruits of his New World expedition. His son, this child of the New World, would be his Sacagawea. His son would help him navigate this foreign land. He would help him to negotiate with the natives. But this son cannot accompany him on this last journey. The son knows that this time his father is drifting toward a more foreign land. The son knows that this time his father finds himself within a forest dark.

His mother tries to shield him from the obvious and painful truth of his father’s steady demise. But the fear in her eyes cannot be masked by her overt attempts at broadcasting to him that all is normal, normal, normal. Her son knows that she will be steadfast in her support for him. In whispered tones at the cutting board, she tells him that she will not abandon his father to some sterile “care facility.” He knows that she is true to her word. He also knows that this act of caring will likely wear a hole through her already frayed tapestry. He envisions the two of them in a small, battered vessel heading further into the dark waters. Further into the full force of a tempest. He already feels his loss. He will lose them both. His father will shear the moorings from their tethers, and the two of them will drift further into this abyss. He watches them from the shore’s edge. He feels the sensation of these unknown waters lapping at his feet. Standing on this shore, he feels hopeless, helpless and full of fear.
He knows that the world is full of daily tragedies.
Unspeakable pain and loss abound.
But this is his pain.
This is his loss. 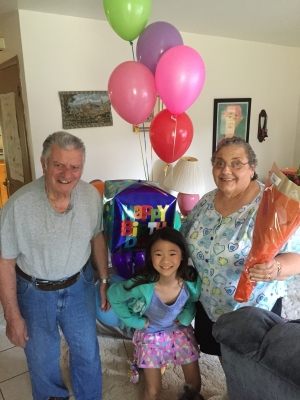