Biking Across the United States with LBD

My partner John has been diagnosed with LBD for two and a half years, and before that with mild cognitive impairment (MCI) for almost three years. In January of 2016, he decided he’d better do something on his bucket list, or else it will be too late. Instead of the solo bike ride across the country he had in mind, I persuaded him to go with a tour.  Before the tour started, we explained his disease and symptoms to the tour leader, Bubba of Bubba’s Pampered Pedalers, who accepted him for the two-month ride from San Diego, California to St Augustine, Florida.

The six weeks of preparation almost did me in. Many items had to be bought and packed, details of travel worked out, and medications sorted into little baggies for him to take each morning and evening. I was very concerned for his safety, even with the tour group looking out for him, but this was so important to him that I couldn’t stand in his way. He needed my help with everything except, curiously enough, buying a new bike and dealing with the bike shop to get it buffed out for this epic ride. (He always was a gearhead, so I guess his motivation was stronger in this area.)

When I dropped him off at the airport, the first thing he did was lose his wallet. He found it under the toe rail at the TSA line about 20 minutes before his plane left our home state of Hawaii for San Diego. Meanwhile, all I could do for him was to pray; I called on angels to watch over him for the two months that lay ahead.

It seems they did, as he successfully completed the ride, along with 36 other riders most of whom, like him, are in their 60’s. Some of them may have just been the angels I had asked for.  There were a few nights in which he woke them up shouting in his sleep with his REM Sleep Behavior Disorder (RBD). There were many occasions in which fellow riders or staff reminded him that he was leaving his backpack behind in a restaurant or other venue. John reveled in the feeling of the wind on his face as he biked down the road, he described it as a meditative state while riding (just not the part on Highway 80 near Tucson, he tells me).

By the time the group dipped their wheels in the Atlantic Ocean in St Augustine Beach to end the ride, John had enough. He was depressed and anxious, probably from the stress of the experience. If it were to last longer, he told me he would have quit before the end. He’s been back home for two weeks, and in getting back to his routine, he’s getting back to a more stable mood. He would like to go on more bike tours, but I can’t handle the stress of getting him ready! Plus, we need his savings to pay for his care in the future.

We are thankful that he was able to accomplish this bucket list item, and that he arrived home safely with all of his essential possessions, like his wallet. John wants very much to share this story because he hopes that other people with LBD will be inspired to live as fully as they can. He also would like to reach people who don’t yet realize that a diagnosis of dementia does not mean a person is incapable of doing something awesome. 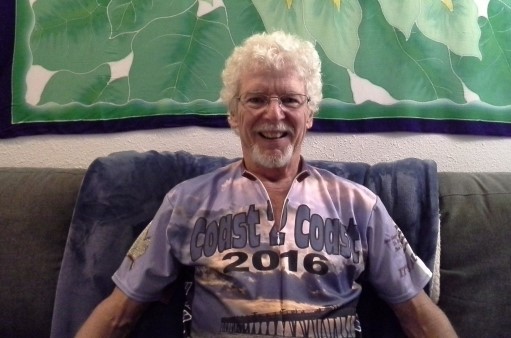