This terrible disease was all too familiar to my family and I.  Almost two years ago, my mother, who was only newly 52 at the time, was diagnosed with LBD.  My family includes my older sister Erin (25), my older brother Alex (23), my father (50), and me, Stefanie (21).  My mother, Melissa, was diagnosed in March of 2014.  She began showing symptoms and having hallucinations in January of 2014.  Unlike most LBD patients, we were able to get a very swift and sudden diagnosis, but this was only the case due to the fact that all of these symptoms had seemed all too familiar to us.  My grandmother, who was Melissa’s mother also had LBD.  She was diagnosed back in the late 90’s and passed away from the terrible disease when I was very young in the year 2001.  She was diagnosed in her early 50’s as well, at the age of 58, and passed away at only 62.  We all had already experienced this disease once, and here now, we’re living the nightmare all over again.  It is absolutely breaking our hearts to watch this take another loved one from us all.  As if my heart isn’t breaking enough, it’s absolutley devastating to see my Grandfather lose his wife and someday soon, his daughter.  My entire family has done major research on this disease over the past couple of decades, and even more so over these past couple of years.  I know it’s very rare to have multiple cases within families diagnosed with the disease.  As well as both being women, and both being in their early 50’s.

This disease is a daily battle for my mother, as well as my entire family.  As of now, my father and I live at home with Melissa.  She began taking the Exelon patch immediately, two years ago.  And, thankfully we were given about a year and half of many great, unsymptomatic days.  Unfortunately, those days have begun diminishing slowly.  Over the past four months who symptoms seemed to increase significantly, almost over night.  It’s constant violent hallucinations that the medicine can only work so much to take away.  She has yet to show any Parkinson’s symptoms so far, at least none extremely noticeable.  I have noticed her handwriting becoming slightly shaky, and her posture is starting to give with the stiffing of her neck muscles.  Mainly all of her symptoms are the dementia-related ones, which seem to be the toughest to manage.  There’s so much more to this daily nightmare that I could talk and write about for hours.  I can’t begin to describe the heartache it is to watch your mother slowly disappear.  I never imagined having to accept my mother was dying at the age of 21.  It has been extremely hard for me to cope with, especially with this being such a significant time in my life.  I’ve been finishing up my Bachelor’s degree, and plan to start a career and a family someday.  It’s hard to focus on, what should be such a bright and happy beginning for my life ahead when all I can think about is my mother and the limited time we all have left with her.  I feel guilty majority of the time, with every day that I am not spending with her.  I try to spend as much time with her as I can and appreciate every single minute of it.

I would love to get in touch with others in my similar situation.  I know my mother thoroughly enjoys following your facebook page and reading posts and articles from others with the disease.  She really wants to do more to spread awareness of the disease, as well as the rest of my family does. 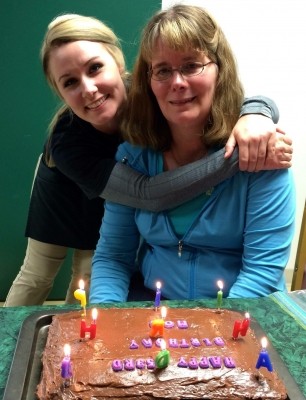