What do you mean he lost the car? He grew up in that town how could he misplace the car? This was the single biggest incident that had happened to date. The other signs were far less obvious and could be “covered up” or excused due to fatigue, general old aged-ness or some other reason we’d drudge up. Mom knew what was going on though — most people probably did, but admitting it was far different. He is the Patriarch of the extended family, he should outlast everyone else — heck he is the strongest person I know.

But the diagnosis came and soon after we all cycled through “Life In The Balance” a book written by Dr. Thomas Graboys a world renowed cardiologist and LBD patient who wrote from the patients perspective. It was hard to read and so often I think myself and my 6 siblings found ourselves saying “yeah, but Dad would be different”. Well so far Dad is no different but he is still my hero.

I interviewed him for this piece and I tell his story wherever I go. I asked him what his thoughts were when he read the book he said “dreadful, because I realized I was going to lose my marbles. This disease is a life sentence”. My mother felt as if she had obtained a deep insight into what her future would look like and when asked to describe it in a word or two she said “not pretty”.

I truly believe that LBD patients are hand picked to travel on this journey. I think they have a characteristic about them that allows them to endure the pain, the frustration, the loss of cognition, the embarrassing, humiliating and sometimes funny moments because they are warriors — in the midst of a losing battle but all the while handling it with extreme dignity and grace.

Dad’s greatest obstacle he says, is his shaking hand. He cannot write and says he would switch to his left hand but it trembles too. Mom says hers is patience. “I have no patience and the worst thing is that he looks the same. He looks as if he can still do the everything he used to do but he can’t. I am short tempered and I know he doesn’t deserve that”.

I used to be angry about the disease feeling as though it robbed him of himself and me of my Dad. My children of their grandfather and my husband of a father in law that would teach him how to build shelves, hang wallpaper and generally fix things. He was my family’s go-to guy for home ownership advice, financial wisdom and his drive is something I only dream to replicate. He gave every single thing to every single person and rarely took anything for himself. He is a humble man, very successful in his day and his legacy needs to live on far past his years. So now, rather than anger I use that energy to motivate me. I educate every single person within my reach about the disease so we can raise money, find a cure. I work morning, noon and night organizing a road race to promote healthy living and raise money for LBDA. I joined their Board of Directors to help to make a difference. In truth, I’m just like him because this is what HE would have done, if he could.

I asked him what advice he would give for new LBD patients and he said “accept it”. He often says that he never blamed God for “doing this to him” because he knows we all die from something. He wants patients to know that it’s imperative to accept help from others. No one can go through this alone. Mom says “try to find the Patience store and call me when you find it”. She likes to make light because this isn’t the way she envisioned her Golden years — I can appreciate that. She does say for caregivers to “read as much as you can and remember, it’s not the person, it’s the disease”. She feels that joining a support group is critical because “you can say what you NEED to say without judgment”.

I don’t blame anyone either in fact, I’m grateful. I have so many friends that have lost a loved one too quickly and didn’t get the time they needed or wanted to say goodbye. I have the honor of telling my Dad everything I want to say before he dies, I have the honor and the cherished memories of crossing the finish line at the race that honored him. I have the honor of saying that he is my greatest hero, my biggest role model and I love him with every fiber of my being and I’m so proud that he is my Dad.

My parents taught me that life is far greater than me and through this journey I have found my purpose. A life without cause is a life without effect. I love you Mom and Dad. 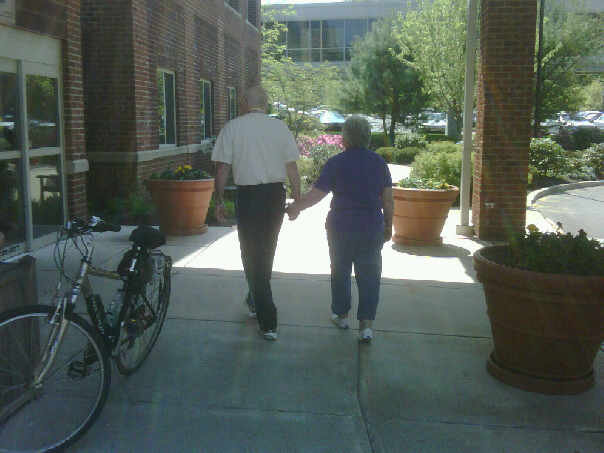