10 things I wish I had known sooner

Our Mum died from dementia with Lewy bodies. Caring for someone with dementia can be frustrating, stressful and completely overwhelming and the following are the 10 things that I learnt the hard way. Although they are often easier said than done, I believe that if you don’t, you will only be exasperating the behaviours that make dementia so difficult to deal with in the first place. They are all things that I wish I’d known sooner as they would have made the journey easier for all of us but especially for Mum.

1. As soon as you are concerned that a loved one may have dementia, make sure you have a basic understating, not only about dementia in general, but about the specific diseases that cause it. This will help you work with their doctor to get an accurate diagnosis. Once the type of dementia has been diagnosed, learn as much as you possibly can, because once you understand the symptoms, the less confusing and overwhelming they become.

2. From very early on in her illness Mum used to hallucinate, which before we learnt that hallucinations are a common symptom of dementia with Lewy bodies, were very alarming. In the early days we used to spend hours trying to convince her that there was nobody living in her house, which just led to upset and mistrust. I eventually learnt that their hallucinations are very real to them and with Mum the best way to deal with it, was to try and distract her onto something else, usually by asking her if she wanted to go for a ‘coffee’.

3. In the early days we tried to keep Mum engaged in the things she used to enjoy, like cooking, even though she seemed disinterested and would wander off. I now understand that because of the disease, she was unable to carry out the simplest tasks, and trying to encourage her just led to embarrassment, frustration and a loss of self confidence. It is important that you understand their limitations.

4. Never put someone with dementia in the back of a car alone, especially at night. Once Mum, my partner and I went to see my sister and on the way back Mum sat in the back. It was a journey of a couple of hours and when we set off it was light but soon became dark. About half way through the journey I turned to ask Mum if she was ok, to which she replied that she was terrified and needed to get out of the car. She was so terrified that we eventually had to stop the car and I got in the back with her.

5. Do not constantly correct or try and make someone with dementia remember things. You have to accept that if they can’t remember your name for example, it doesn’t mean that they don’t love you; it simply means that the part of the brain responsible for memory has been destroyed by disease. And no matter how many times you remind them they will not always remember.

6. Go with the flow, do not get hung up on the little things and never be embarrassed. In the early days, if Mum had her jumper on back to front for example, I would spend ages trying to persuade her to change, leading to upset and agitation. As the disease progressed and just getting her dressed was a monumental effort, I stopped doing this and concentrated on the things that really mattered, like was she content, eating enough and pain free.

7. Never ignore, talk through, over or about someone with dementia as though they are not there. This is something that I always tried very hard not to do but I have seen others do it, time and time again, and I have seen the impact it had on Mum. Try and remember that just because someone with dementia may struggle to articulate what they think, doesn’t mean that they don’t have a point to make. Try and find ways to help them.

8. Keep trying different approaches when dealing with challenging or confusing behaviour until you find a technique that works. I always found that distraction, by asking Mum if she wanted to go for ‘coffee and cake’, usually worked.

9. It is unfair to argue with someone with dementia as they no longer have the ability to apply logic and rational thought to a situation. I always feel that arguing with them is like arguing with a small child and is really unfair and cruel.

10. Be careful what you say as an innocent comment can be overheard and misinterpreted into something frightening. Once Mum accidentally over heard us updating a family member that she had been sectioned during a short stay in hospital. This absolutely terrified her as she was convinced she was going to prison and kept asking over and over again what she had done wrong.

And finally remember that love will endure. They may no longer be able to articulate how they feel; they may forget your name, but this does not mean they no longer love you. Try and help them find other ways of expressing themselves such as a cuddle or even a simple smile. 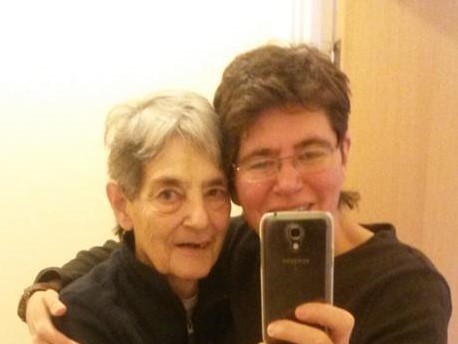